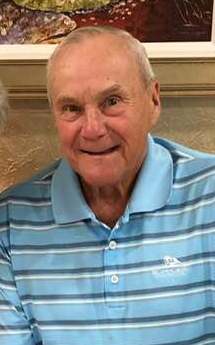 Donald J. LaJoie, 83, of Singer Island, FL and Danbury, CT passed on April 24, 2020.
Born April 17, 1937 to William and Bernadette (Bouchard) LaJoie. He was the beloved
husband of Helen (Marasco) LaJoie who was at his side.
He went to Danbury High School and was also a member of St. Joseph’s Church in
Danbury. He served in the Army for 2 years and was a lifetime member of the Knights of
Columbus.
Donald owned and operated Omaha Beef Co.Inc., until his retirement. He enjoyed his
retirement, doing what he loved best, playing golf. Luck was always with him, having 5
hole-in-ones, and playing Seminole Golf Course in Jupiter, FL was the highlight of his
life. Donald belonged to The Preserve at Ironhorse in West Palm, Richter Park in
Danbury and Candlewood Valley CC in New Milford. He was also a former member of
Ridgewood Country CC, Danbury.
Survivors are, Helen, his high school sweetheart and wife of 64 years, his sons, David
(Tracie) of Danbury, Dennis (Karen) of Bethel and daughter, Michele Chipman (John) of
Sandy Hook. His grandchildren, David, Danielle and Douglas LaJoie, Lauren Kunz and
Danielle Knoche (John), Jordan and Meghan Chipman, and 3 great grandchildren.
Sisters, Betty Dumas, of AZ, Flo Negri, of Danbury, Irene Fuller, of TN and Terry
Boulais (John), of TN. Brother in law, Richard Marasco, of Bethel and sister in laws,
Sharon Randazzo (Randy) of NY and Bettylou Johnson of FL. Many nieces and
nephews. Predeceased by daughter, Denise LaJoie. Sister, Rita Kaplanis and brothers,
Ralph and George.
Helen would like to thank Susan Taylor and all from Trust Bridge Cancer Center.
Services will be announced at a later date.
In lieu of flowers, the family would like donations made to:
Trust Bridge Cancer Center, 12305 Old Dixie Highway, Jupiter, FL 33458.
Ann’s Place, 80 Saw Mill Rd., Danbury, CT 06810.

Sending you thoughts and hugs, Helen.

Helen and family,
We are very sorry for your loss! Donald was always very friendly and a true gentleman! Please know that you are all in our thoughts and prayers.
Love, Carol and Roger Guertin

Dear Helen and Family,
From the west coast we send our love, condolences and prayers to the whole Lajoie Family.
What an amazing life You and Don have lived!
An example for so many!
We know Don is at peace now, may GOD give you and your Family strength to get through these very difficult days.
Love and prayers,
Tony & Joan Rizzo

Dear Helen,
Wishing you peace and sweet memories as you bid goodbye to Don.
Holding you in our hearts.
Love,
Wilda Hayes

Dear Helen, David, Dennis, Michele and families,
Words cannot express how sorry we are for the loss of Donald. Heaven gained another angel. May all of your memories together bring you peace and love to your hearts.
With Sincere Sorrow,
Paul & Diane Abrams

Dear Helen and Family,
While many good people enter and pass through our lives, there are only a special few who hold a special place in our hearts. It was always an honor to work for such a good family and an even a greater honor to get to know such a good person. I will miss Don a great deal but will always feel lucky to have played a small part in his life. May your family and friends help you through this difficult time.
With love and care,
Chris Rabuse

Helen,
Sorry for your loss.I had worked for Don at Danbury Beef and then Omaha Beef. He had a favorite saying If you don’t do a good job don’t do it at all. He taught me a lot as a teenager.Even after I had left the company he always treated me with respect. My prayers are with you and your family.
With my deepest sympathy.
Forrest Horton

We are so very sorry for your loss. Donald was truly a special person, we always enjoyed talking with him and hearing his positive thoughts. He will be truly missed. Our thoughts and prayers are with you at this difficult time.
With sincere condolences.
Carol and Gary Singer