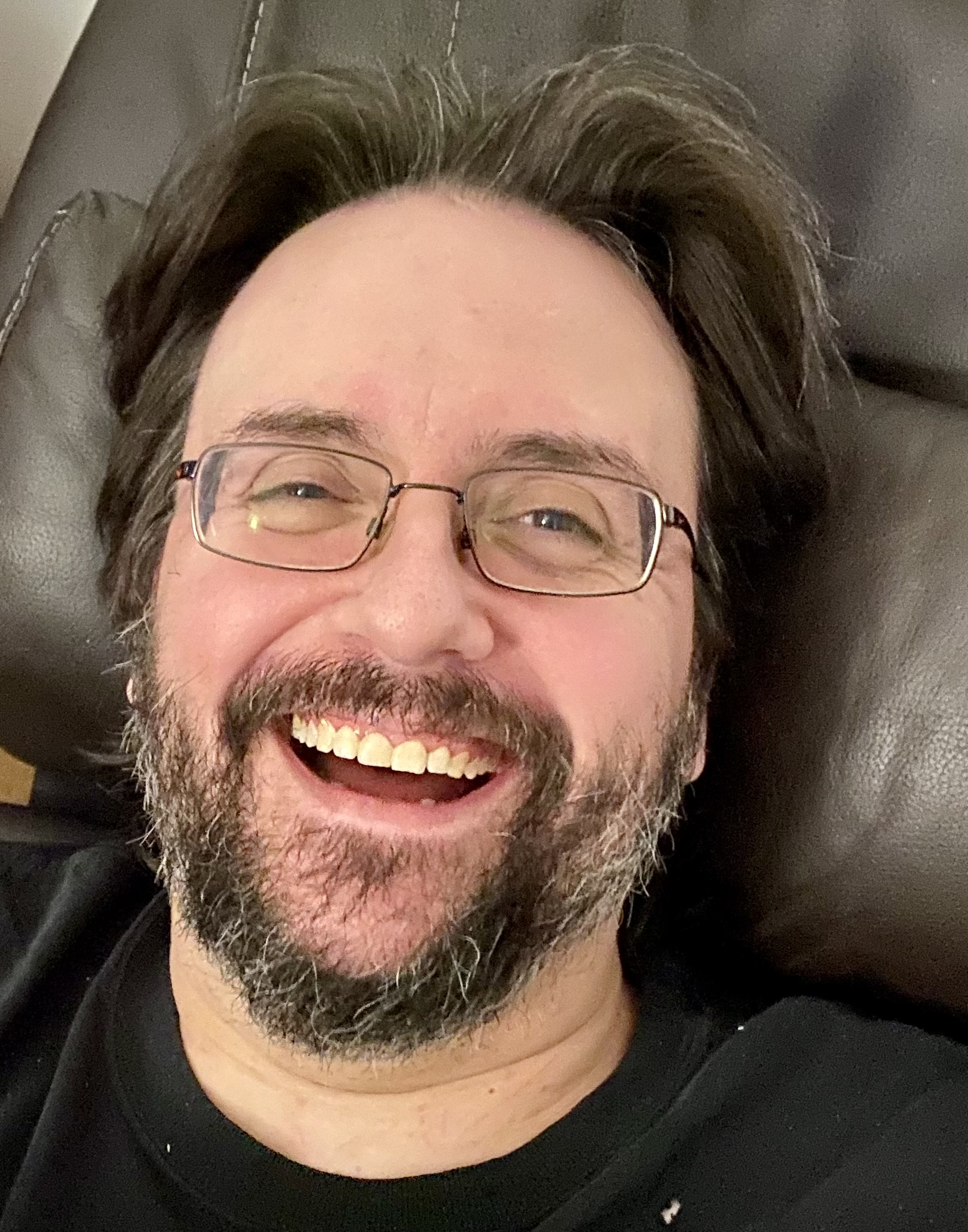 Eric H. Ripley, 46, of West Palm Beach died suddenly December 15th, 2021. He was a self identified geek, and proud of it. Throughout his life he made his way through numerous dungeons, finished countless D&D Campaigns, and navigated the treacherous domains of XBox, PlayStation and Steam with the ease of a savant. He never rolled below a 16. If he were writing this now, it would be so full of the most obscure cultural references, it would be completely indecipherable to the average reader. He will be sorely missed.

Eric entered the world in 1975, in a small hospital nestled between the rolling mountains of New Hampshire. He celebrated his 4th-13th birthdays on a small farm in Pittsfield, NH. The farm was chock full of animals: horses, barn cats, ducks, and dogs. There was never an animal unloved with Eric around. It was on this farm that Eric first learned to ride a bike. He bumped down the dirt roads of rural New Hampshire with an incurable zeal and kept his love of bike riding through adulthood.

He moved to Florida when he was 13, in 1988, and was astounded the world could be so flat. The biggest shock, he said, was ‘people here don’t have basements!’ Around this time, Eric nourished his love for all things Fantasy, Sci Fi, and Super Hero. He never could put that book about anti-gravity down. He found that the world of computer games and gaming consoles suited his intelligence and his knack for strategy. In high school, he recruited his mom Betty to optimize his gaming. He would complete all the major quests, battle all the low-res monsters, and she would mine all the materials necessary for his victory while he was at school. They were the perfect team.

He enrolled in Lincoln Park High School for two years and graduated in 1994 from Fort Pierce Central. It was there that he met his future wife. In 1995 a car accident left him without the use of his left foot. While the recovery was painful, and he walked with a cane for many years, he laughed: now he couldn’t help but put his right foot forward.

Eric attended his first Renaissance Fair, at the ripe age of ten with his older sister Robyn. Perhaps it was the jousting that entranced him, or maybe the turkey leg the size of his arm, but there was no doubt that the ren-faire bug bit him and bit him hard. 15 years later, Eric married his high school sweetheart Tina in an elaborate renaissance wedding – complete with a faux duel.

Throughout his life, Eric looked for purpose and for him there was no greater purpose than fatherhood. Kaylan Ripley entered the world in 2006, Perrin Ripley one year later. He drew the names from two of his favorite fantasy series, the Sword of Truth and the Wheel of Time (both series he read countless times). With one daughter and one son, Eric thrived as a stay-at-home dad. He taught them the important things in life: an appreciation of good books, a love of games, and an understanding that the world is not meant to be taken too seriously.

In 2015 Eric rediscovered his love of animals when he founded Josephine’s Rattery and Rescue, with his wife. He cared for aging and sick rats, assisted in finding loving homes for them, educated the public on the care and benefits of pet rats, and adopted many of them for himself. Eric could often be found with a rat cuddling on his shoulder or sleeping on his lap while he regaled family and friends with stories that left them all in stitches.

Eric loved without restraint, and those who knew him best felt the depth of that love. He will be remembered by his wife Tina Ripley, their two children Kaylan (15) and Perrin (14), and his mother-in-law Cynthia Miller; by his mom Betty Evans-Brown and his Pops David Evans-Brown; his older sister Robyn Ripley, brother-in-law Paul Douglas, and niece Laurel Douglas; by his younger brother Christopher Ripley and by his best friend Valerie Trahan (his companion in many a campaign). Eric is pre-deceased by his father, CD “Rip” Ripley.

The Celebration of Life for Eric Ripley will be held January 22nd, at the Micanopy Pavilion in Okeeheelee Park in Greenacres, FL starting at noon.   —Dress comfortable—
All who come are welcome to bring food/drink and a story.

A service is being planned for the spring when Eric will return to the place he loved most, that farm in New Hampshire. In lieu of flowers, please consider a donation to your local animal rescue organization.

What a beautiful person – I am so sorry I never got to meet him.

To all of Eric’s family, I offer my deep condolences and celebration of his life. No amount of my love can ease this pain, but please take what you need.

Oh Robin and family I am so sorry. -SZap

Helen Murray - Grandmother of his "daughters from another mother"

Our love and prayers are with you all. Eric was a great personality and his smile knew no bounds. He meant so much to Shelby and Peanut too. He will always be in their hearts.
I really enjoyed our driveway conversations and discovered we had similar roots. God bless you all. Hugs.

My deepest condolences to Eric’s family and friends. You will be in my thoughts and prayers during this difficult time. I am so sorry for your loss.

I just heard this terrible news I’m so saddened and so sorry. I spent so much time with him and all the rats and all the leftover hamsters and gerbils. I’m in shock I’m sending hugs to the whole family

Robyn I am so deeply sorry for your loss and cannot imagine the pain you must be in. I wish that I could give you a big hug. Try to remember the words you shared with me, keep ____ going. Sending all my love your way.

Christina I am so sorry to hear about your loss! I feel for you and your children. I will be praying for you.

So sorry to hear about Eric’s passing. I will always remember his warmth and compassion, the caring shining thru in all the things he did. Bolette and I so enjoyed sitting with him and talking about life and events, even if it now feels like too short a time. We will always remember our times together. Really sad to hear such a warm light has left our world. With all of my family’s condolences to yours! Oliver

I only met/saw Eric about 4 times and he was helpful with my first rat(s) adoption and when one needed medicine once. He showed his love for my boys the one or two times after I left with them the first time. He was mild mannered and seemed caring. I do not know him personally, but I am sad to know this none the less. My most deepest condolences to his family, his loved ones. I am so sorry.

I had the great pleasure of working with Eric at New Image. I will remember him as one of the sweetest people I have ever met. My condolences to Tina, their children and all who will miss him dearly…..