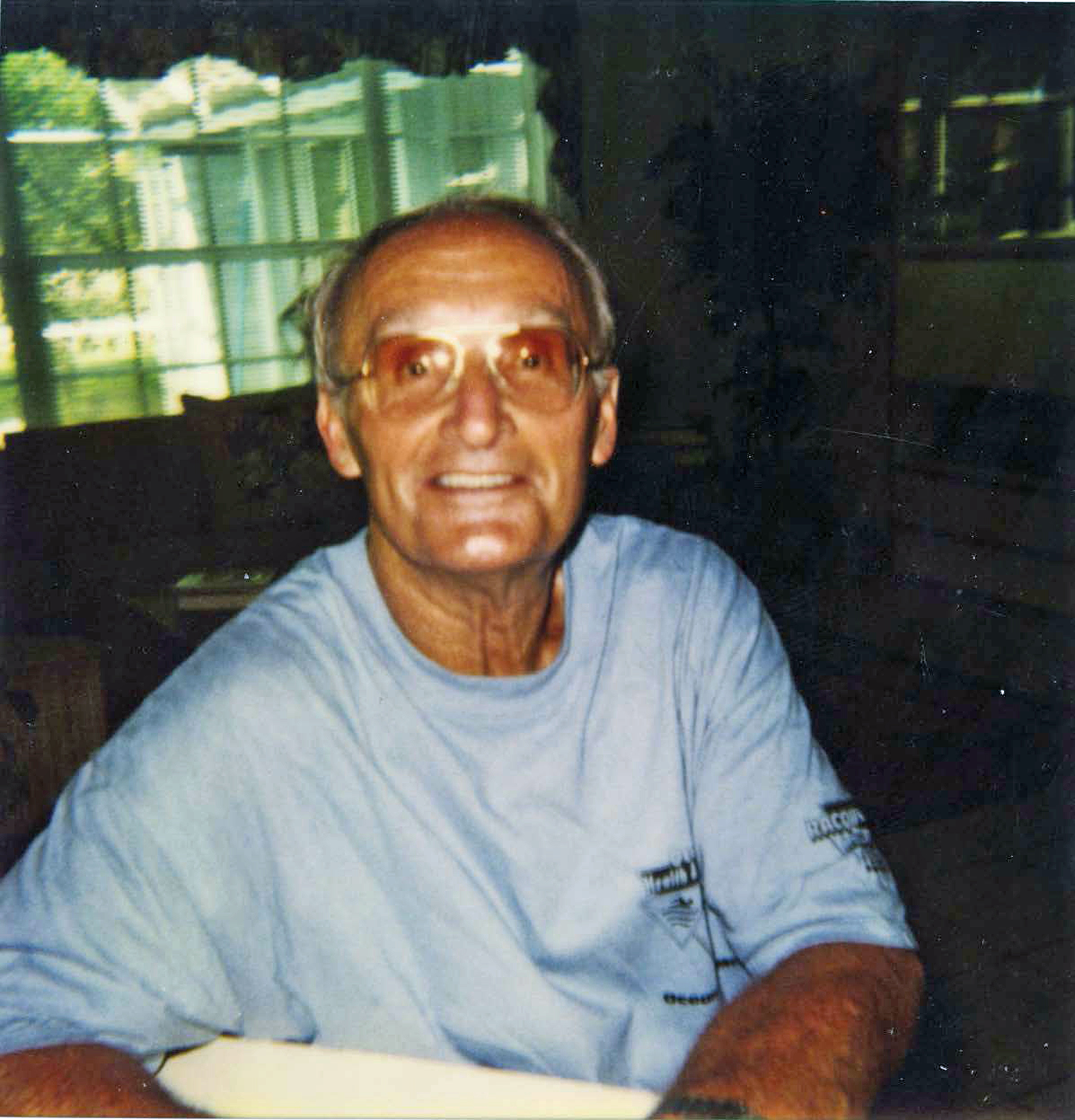 He was born in Passaic, New Jersey. He received a football scholarship to attend the University of Virginia where he played for four years and received his Master’s degree. Upon graduation, he was signed by the New York Giants.

In 1954, he married Mary Ann Baker. With Mary Ann by his side, he lived an extraordinary life filled of diverse careers. Passionate coach, teacher, salesman, business executive, champion athlete, real estate developer, and entrepreneur. A career opportunity ultimately led him and his family to Ocean City, Maryland.

He began in Ocean City with the developing of Mystic Harbor on route 611. Going back to his passion for fitness, he opened a health club in the Sheraton (now Clarion) in the late 1970’s. In 1983, he and Mary Ann built and opened Ocean Health and Racquet Club. A year later, they opened OC Sneakers Restaurant, which later became Windows on the Bay. Gerry, Mary Ann and family provided fitness, wellness and recreation to the community for over 30 years. During this time, he also assisted Mary Ann in the creation and operating of Coach’s Corner Diner, which is now operated by their son Martin and his family.

A celebration of Gerry’s life will be held at a future date. Anyone wishing to express condolences may sign the guest book at www.edgleycremationservices.com. In lieu of flowers, donations can be made to Meals on Wheels of the Palm Beaches, Mealsonwheelspalmbeaches.org.

So very sorry to lose your beloved Coach. He was such a nice man. We know he will be happy to be reunited with his love in heaven ❤️
Love to all,
Faye and James

GOD BLESS YOU Uncle Gerry. I always enjoyed visiting you and Aunt Maryann.

May God bless this family. Well, He actually already has, you had a wonderful Father AND Mother. Such good people, I loved seeing them out together. May perpetual light shine upon the two of them.

Thinking of your family during this time. Glad your father was part of Ocean City. Prayers

My condolences and prayers to the family at this trying time…

Our deepest condolences to all of you. I had the pleasure of meeting him on several occasions and such a delightful gentleman. May He rest in peace, and his memories continue with you all each and everyday.

So sorry to hear of Jerry’s passing. He was a great guy, wonderful husband, loving father. I know you’ll miss him but know that he and Mary Ann are coaching and giving wellness advice in Heaven to all the angels!

Rest In Peace Coach. We will miss you. Love Gary and Patti

Sincere condolences to the FURST family! “COACH” was so loved by his “GYM PATRONS”. So many happy and fun memories of Gerry’s Gym!
Thank you, Gerry, for all that you did for us at the gym, and for everything you and your family did to support the Ocean City resort area.
Rest in peace.

Our deepest condolences for Coach’s family. Coach had such a warm spirit and led such an interesting life. We always enjoyed seeing coach when we visited Mary Ann and Paul’s house.

Our deepest sympathy for your loss. Jerry leaves a tremendous legacy. Find comfort in your loving memories.
The Uhlfelder Family

RIP Coach , you were a good man

Deepest sympathy to the Furst Family!
Gerry alway had a smile in his face and made time to speak and listen to everyone. May all the good memories with him sustain you.
Jeff and Jamie Albright

Deepest sympathy to the Furst Family. Gerry always had a smile on his face and would talk and listen to everyone. Thinking of you all.
Jeff and Jamie Albright

Our deepest sympathy to the
Furst family.
Sam and Crystal Clayland

Sincerest condolences to the entire family, Coach was one of the greats in this world, truly an honor to have known ,and worked for such a outstanding man. Harry Holden

So sorry for your loss loved your dad,

So sorry to hear about Jerry’s passing. My condolences to the family.

‍♂️ My deepest prayers and condolences to the Furst family, I remember my sister and me joining at Sheraton when we were young girls ,we lived next store ,English Towers,dad signed us up . Then when I signed up for the 60st st all thru high school ,my fishing career ,then my children ,I spent a lifetime in all the chapters in my life ….History in Ocean City Maryland ,he was truly an Ocean City icon…Much Love‍♂️‍♂️‍♀️‍♀️

Our condolences to the family

Condolences to the entire Furst family! Loved the OCHRC and have so many wonderful memories from working out there! RIP Coach, you were an OC icon for sure!!!

Condolences to the Furst family. I have very fond memories of the Coach and the Ocean City Health and Racquet Club. I remember sitting at the bar and having a beer and watching Coach send a kill shot to the corner.

Rest in Paradise Gerry!!! Coach created wonderful memories for many people. Ocean City Health and Racquet Club was a big part of my life for many years. Still have my Stairmaster I bought from Coach. Never forget the good times we had at Gerry’s Gym and that great steam room. Nothing like it, even today. Thank you Furst Family for the unforgettable experience.

Had the pleasure of meeting Mr.&Mrs. Furst while working at the Exxon @ 52nd Street in Ocean City. As well as other members of the Furst Family. Condolences to Martin and the Furst Family, and friends all.

In loving memory of a wonderful person. We will miss you always. I know you are happy to be with the love of your life Mary Ann. RIP Gerry

One of my favorite teammates and friend. I will miss you COACH.

My condolences to Jerry, Beverly, Martin and your entire family. I knew Jerry and your family for many years. May his memory be eternal with the Lord.

You kept us fit and in good shape for many years at both locations. Your health club was 1st class. Thanks for contributing to our health and making your good mark in Ocean City.