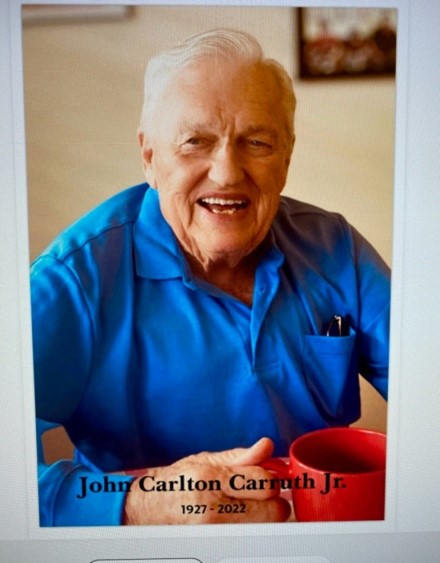 As a WW II Veteran, John proudly served in the Navy on the USS Nautilus from 1944-1945. One of his most unforgettable experiences was being selected to participate in the 2017 South Florida HONOR FLIGHT to Washington, DC.

Owner of Carruth Roofing Company in Miami, Florida for 56 years, John served on numerous local, state and national association boards including the honor of serving as President in 1976 of the Florida Roofing and Sheet Metal Association. John’s favorite pastime was riding around the South Florida area pointing out all the roofs he ever replaced.

As an avid fisherman and “Captain” his favorite passion was hosting family and friends for a day of fun and fishing on his boat “The Leprechaun III” from his home in Key Largo, Florida.

A celebration of John’s incredible life will be held at the Woman’s Club of Stuart on Thursday, March 17, 2022 at 2:00 pm, location 729 East Ocean Blvd., Stuart, Florida.

In lieu of flowers an endowment is being set up in John’s memory through FRSA’s Education Foundation. Please send donations to FRSA, Attn. Lisa Pate, PO Box 4850, Winter Park, Florida 32793 or email to lisapate@floridaroof.com.

I send our Deepest Condolences to Charlyne and family, I was blessed in my path with John’s presence, I met John in 2005 and an absolute honor, the things we talked about, just being in John’s presence, the Lord has a very special place for John, his daily ledger book and his Cross Pen , John you will be remembered as long as I’m here, and until we meet again, John thank you for visiting me’ he knows what I mean’ God bless family, all our Love,

I knew John and Charlyne thru my brother Joe Rutkoski. I also knew Charlyne’s parents Charlie and Ruth and her sister. Many fond memories of the get togethers in Florida and National Roofing events in Phoenix AZ. Charlie will be missed by all those who knew him. God grant peace and serenity to all the family. Rest in Peace, John.

So sorry for your loss but heaven has a new angel. He will Trully be missed. Our prayers are with you and your family.

John and Charlyne 2 of the nicest people I have ever met. And my best next door neighbors. I’m sure John has gone to a very special place and I hope he saves room for the rest of us. The world is a little sadder today. I love you both and my little friend Logan too. Dizzy-girl says she loves you too.

John, Charlene and Logan. We loved you guys since the day you lived in next door. This is truly heart breaking for our family. Praying for healing for you guys!

Charlyne, John was a wonderful man that I had the pleasure of knowing for at least 40 years. My condolences to you and the family.
With Love,
Wayne and Jackie

John was such a caring, kind friend! We were so lucky to meet him during his dog walks with his pal Logan! He shared his wonderful experience with Honor Flight and helped get my dad to also share the experience. Of course after meeting John,,, we got to meet his lovely Charlyne! We were blessed to have these two in our lives- two special people! I know John is smiling down on us right now & glad I have such fond memories of such special moments together. Sending good vibes and prayers for the family.

My prayers of condolences are with you and your family

Charlyne we love you and are saddened to learn John left us. Joan and Jimbob

I was so saddened to learn of Johns passing. He was so kind and wonderful to everyone – a true gentleman. He and Charlyne were so perfect for each other. I am sure there is a special place in heaven for him. I know he will be deeply missed by Charlyne and their family. My heart is with you sweet Charlyne and may your sorrow be overcome by the many happy memories you shared with John for so many years. Sending you all my love.

CHARLYN, My condolence and prayers are with you and your family/

Dear Charlyne. My prayers to you and the family . Ann Beyerle Vero Beach women’s club

Dear Charllyn my prayers to you and the family.

Dear Charlyne, my deepest condolences on John’s passing. He was a sweet, kind and always had the greatest smiles and grins. You and your family are in my prayers.

Our deepest condolences Charlyne. Prayers for comfort to you and your family.

Annetta Sue Allen – GFWC Friend
So Sorry for your loss and many prayers for you and the family.

Charlyne, My deepest heartfelt sympathy to you and your family in the passing of your dear husband. I pray the loving and treasured memories of your years together will comfort you now and in the days to follow.
May God’s loving presence surround you and bring you peace.

Charlyne,
Our deepest sympathy and prayers for you and your family. We love you and we adored John. His life and work in our world has made an impact on so many . What a beautiful man and adoring father and husband. He will be missed but never forgotten.
Dugas Family

I am so saddened about Johns passing. I have known John for many years through the roofing association. We fished many times in the Keyes with John. I have known Charlyne since she was 6 years. old. They have both been very special to me. John will be largely missed in many ways, his generosity, with and love for his family and friends and especially for his wife and boat mate. Love you much Charlyne and sorry we couldn’t be there for the funeral. Let us know when you may be in Tampa and be able to see you. Its hard to believe you guys were married 46 years. What has happened to the time?
My prayers are for your comfort knowing you were with the love of your life and his.

Our Dear Charlyne,
May God be with each of you and help you to understand your pain.
Our Thoughts and Prayers go with you.
We Love you.
Bill and Clara, Longtime Friends