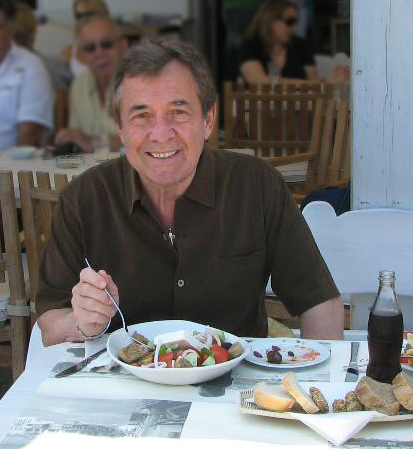 Nicolas R. Kelefas of West Palm Beach, FL, age 77 and founder of Nick’s Diner passed away at home surrounded by his loving family on April 27, 2020. Nick was a wonderful and unique man with a generous heart. His friends and family adored his sense of humor and sarcastic wit. One of his favorite pastimes was bantering with his customers and hearing about their lives. In his 60’s, Nick got his pilot’s license and began his new hobby of flying airplanes.

Nick opened Nick’s Diner in 1986. The Diner quickly became a favorite local gathering spot. Through word of mouth people came from all over South Florida and beyond. The customers not only came for the great food but for a chance to hang out with Nick himself. Nick remembered the names of his regular customers and he was always there to lend a friendly ear.
A loving and devoted husband, father, and grandfather, Nick is survived by his wife Michele of 45 years, his sons Marc and Justin, his daughters Nicole and Alyssa, and his grandchildren Ashley, Justyn Gabriel, Haylie, Daniel, Grace, and Hope.

A celebration of life will be held at Nick’s 50’s Diner (to be announced at a later date). In lieu of flowers, the family requests that donations be made in memory of Nick Kelefas to the American Cancer Society and/or Villalobos Rescue Center.

What a wonderful man. I’ve been going to Nick’s Diner for over 20 years. He was always so friendly and he really cared about his customers. Alyssa carries on in the same way. Nick will be missed by so many. My sincerest condolences to the family.

My sincerest condolence to you, Alyssa, and your family. I am so very, very sorry to hear of Nick’s passing.
I will always remember how friendly he was to his friends and customers at “Nick’s”.
He will be missed.

Nick,
We will miss your great smile and wonderful personalty. You always made a visit to “Nick’s” a very friendly experience. My condolences to the family and especially Alyssa.
Rest in Peace,
Don

What a great friend and hard working person, kind, friendly and always took a moment to say hello when I came in. He surely will be missed in the community. May you rest in peace my friend.

Nick was a mentor to me.I learned so many valuable things while working with him and his family.The memories and stories that I still cherish today.Thanks for Nick, Nick’s Diner & and being a ‘Nick’s Chick” and giving me some of the best times in my life! I was so sorry to hear of Nick’s passing.He will me be missed by all who knew him.My love to Michele & Alyssa.

My condolences to all of next family and friends. I just found out yesterday I’m having breakfast there. I was first introduced to Nick while having lunch there with a client/friend, who thought I could help him with some minor tax problems. He became a client but then foremost a friend. It was always a pleasure going over to see him, I’m going into his back office to talk. He was a kind generous honest man with a great character. He will be deeply missed. Again, my condolences to all who knew him. Bob Slater