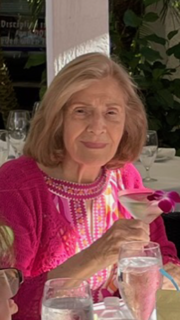 JUPITER, Florida — Ruth Babiarz, age 95, beloved mother of seven children,
died on Thursday, July 28, 2022 under hospice care at the home of her daughter,
Barbara and son-in-law, Lou Skiera in Jupiter, Florida. Mrs. Babiarz had resided
with her daughter Barb in residences in Jupiter and Plymouth, Michigan since the
death of her husband, Joseph F. Babiarz in 2018. “Mom was mentally alert and
engaged until her last day,” said Barbara, “She insisted on having her hair
done along with makeup and cared about her appearance right up to her passing.
It was a blessing to have spent so much of the past five years of my life
with her in Florida and summers in Michigan. She was loved by all and enjoyed
her family and friends so very much. She takes with her to Heaven her worst human
flaws: unconditional love, kindness to all and selflessness. We are all crushed by her loss.”

She is survived by her children: Ruth Sliva, Joseph F. Babiarz, Jr. (Susan), Barbara Skiera (Lou), Bruce
Babiarz (Janet Poulik), Richard Babiarz (Dee), James Babiarz and Jeffrey Babiarz. She was beloved by her
children, six grandchildren: Stefanie, Michael, Mikaila, Zachary, Grace and Margaret as well as her great
grandchildren, “J.R.” John Robert and Parker Crandall and nieces Carol and Brian Momchilov.
In the hours, days and weeks prior to her passing Ruth was surrounded by the love of family, friends in-
person and via electronic visits and calls. Ruth engaged in card games with her children and
grandchildren, trivial pursuit and shared memories of her life and times. She remained mentally lucid
and beautiful to her final days. Mom had a computer-like brain and passion she shared with her son-in-
law for old movies and movie stars of the day to current films. Cookbooks were her joy and she read
them like novels.

She was born Radosna “Ruth” Momchilov on March 31, 1927 to Ziva and Zorka Momchilov in
Ninichichevo, Yugoslovia and became an American Citizen on their emigration to the United States. She
is pre-deceased by her husband of 69 years, Joseph and her brother, Pete Momchilov, both World War II
veterans in the U.S. Army Air Corp. and U.S. Navy respectively. Ruth and Joe met while in high school
while working at Eastern Market in Detroit, her at the cheese counter and he at the meat counter.
They married in 1948 after the war and she accompanied Joe as he earned his bachelor’s degree from
Michigan State University in East Lansing, MI. They were engaged on park bench at MSU by the Beaumont
Carillon Tower, where Joe arranged to have the bells rings when she said yes. By the time of his
graduation in 1951, daughter Ruth and son Joseph had become of the young and growing family.
They returned to Detroit and Joe began working for General Motors Corporation in the mail room. He
went on to earn a Master’s Degree and Doctoral Degree and rose in the executive ranks at GM before
joining Kelsey-Hayes Corporation. Ruth was the glue to the family and was referred to as “Saint Ruth”
for her unconditional love of her children, self-lessness and total devotion to her family.
She managed to engage in a few hobbies as a painter of landscapes and still life in oil.
She also bowled on a ladies bowling league in Farmington Hills. Raising her family of five boys and
two girls and caring for her mother, who moved-in to the family household at the Farmington Hills home,
was clearly her life’s work. Ruth became clerical worker during World War II and then engaged as a
full-time mom and homemaker to her husband and seven children. The moved to Farmington Hills in 1969
and resided there until retiring to Boca Raton, FL in 1991.

Arrangements for a memorial service and celebration of her life are incomplete at this time. Donations
to Hospice care in her memory are most welcome.